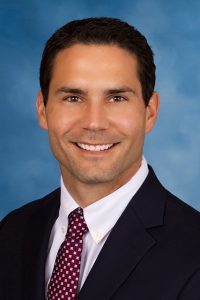 Mitchell Herrema was born in Grand Rapids, Michigan. He attended Michigan State University where he earned his Bachelor of Science degree in kinesiology, with high honors. He also earned academic All-Big Ten while playing football and was named MSU’s “Student Athlete of the Month” during his sophomore year.

After completing his undergraduate degree, he remained at MSU to earn his Doctor of Osteopathic Medicine degree at the College of Osteopathic Medicine. He completed his residency training at McLaren Oakland Hospital in Pontiac, Michigan. He also did several specialty rotations including sports medicine, trauma and total joint arthroplasty at the Detroit Medical Center in Detroit, Michigan and University Medical Center in Las Vegas, NV. After residency, he completed a fellowship in adult reconstruction and total joint arthroplasty at Joint Implant Surgeons of Florida in Fort Myers, Florida. During fellowship, he performed or participated in over 1,000 total joint arthroplasty procedures, including anterior hip, partial knee resurfacing, revision hip and knee replacement, and total shoulder replacement. He received additional training in robotic- assisted partial knee and hip replacement as well as knee arthroscopy.

Dr. Herrema brings a conservative approach to his practice. He believes in trying nonsurgical options prior to knee or hip replacement. These options include injections, physical therapy, bracing and other anti- inflammatory agents to help reduce pain from arthritis. Dr. Herrema specializes in revisions of failed or older surgeries that need reparation or refinement.

Dr. Herrema serves as the Chief of Orthopedic Surgery at Morton Plant Hospital where he strives to improve the quality of care for all orthopedic patients. In addition to being a leader at the hospital, Dr. Herrema’s expertise has been sought after by orthopedic implant companies. Dr. Herrema is currently on a design team to help create a total knee replacement that will most closely match patients anatomy and normal physiologic range of motion.

His wife, Heather, is a neurologist in St Petersburg, Florida, with subspecialty training in Parkinson’s disease. Dr. Herrema and his wife enjoy spending time with their daughters, Emma and Ellie.